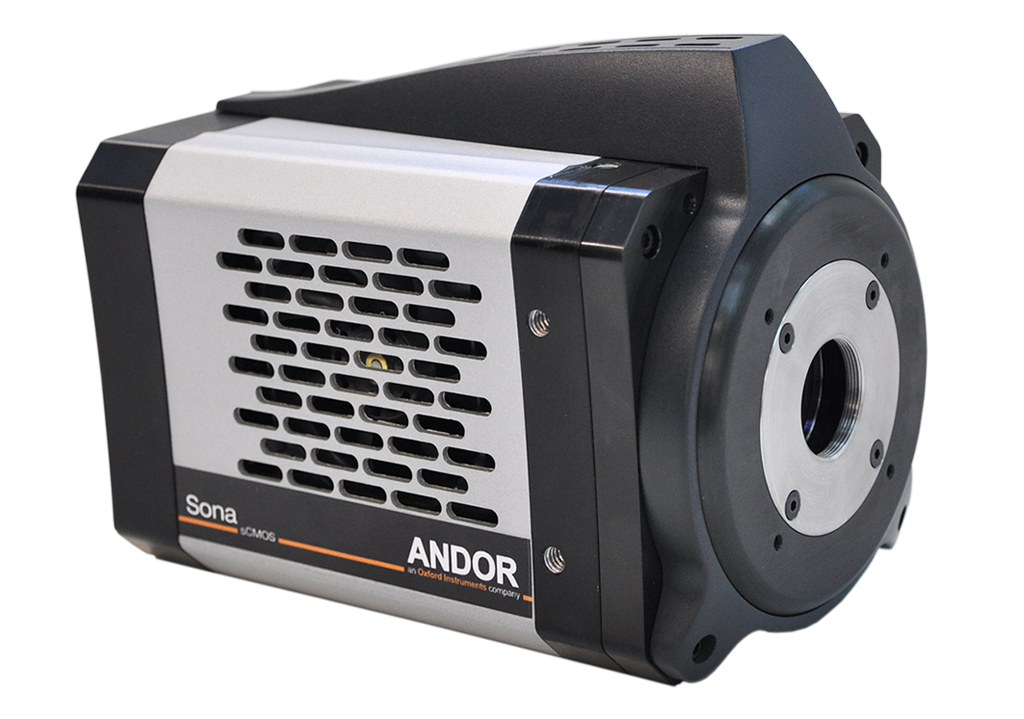 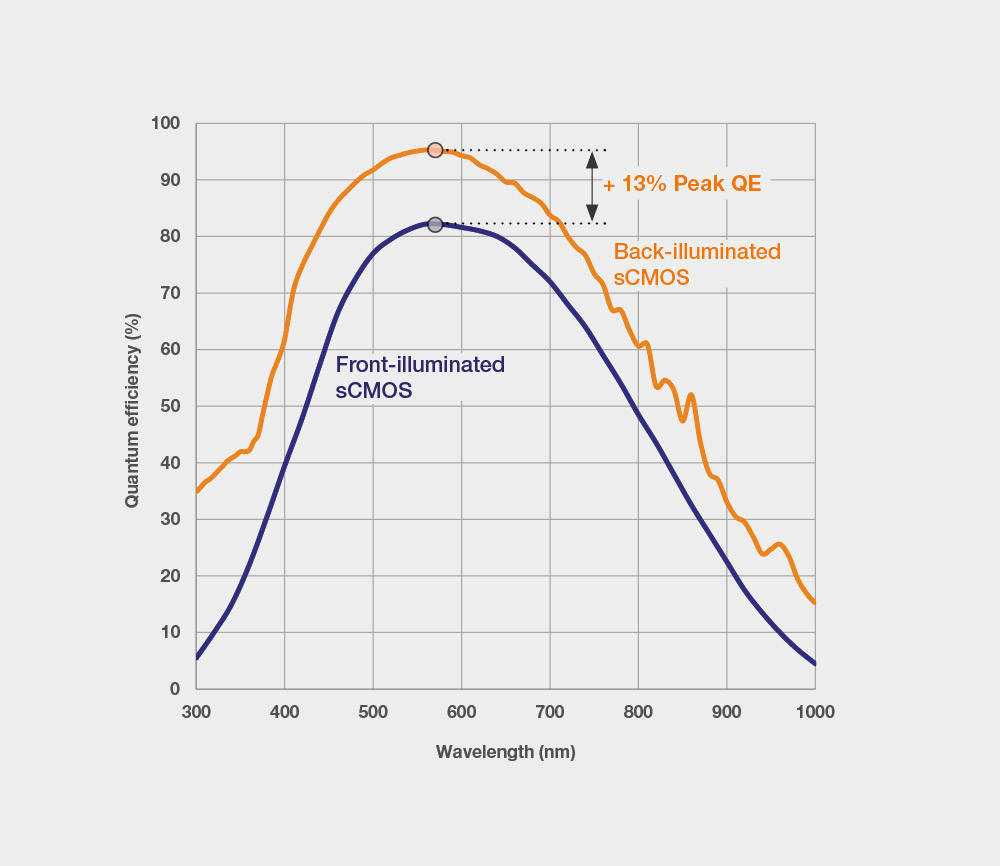 Sona is Andor’s latest high performance sCMOS camera platform, specifically for life science imaging applications. The NEW Sona 4.2B-6 model provides the perfect balance of sensitivity, speed and resolution for optimal imaging performance across many applications. The 4.2 Megapixel format with 6.5 µm pixels is ideally suited to the widely used 40x and 60x magnifications. The flagship model, the Sona 4.2B-11, is the ultimate solution for sensitivityand field of view, offering a stunning 32 mm field of view. All Sona models feature the latest back-illuminated sCMOS technology with 95% Quantum Efficiency (QE).

The latest model, the Sona 4.2B-6, has a back-illuminated 4.2 Megapixel sensor with 6.5 µm pixels. This format matches perfectly with modern microscope port sizes, and provides optimal resolution for the widely used 40x and 60x magnifications. A QE of 95% maximizes signal collection, which when combined with thermoelectric cooling to -45°C, results in the lowest noise floor, to allow the highest possible sensitivity for demanding low-light applications. Sona 4.2B-6 is also capable of up to 74 fps in full-frame in full-range 16-bit making it also suited for imaging dynamic cellular processes. Sensitivity and speed are complemented by Andor’s UltraVac™ sensor enclosure and our advanced FPGA processing for market leading quantitative accuracy and noise reduction technologies. With these capabilities, Sona 4.2B-6 is sure to provide exceptional performance under even the most demanding imaging application.

The flagship 4.2 Megapixel Sona 4.2B-11 model utilizes a unique technology approach that enables us to usefully access the entire 2048 x 2048 array, offering an impressive 32 mm sensor diagonal, harnessing the entire field of view available from the microscope. This is perfect for applications that require maximum information content, allowing large fields of cells, whole embryos or tissue samples to be captured with absolute clarity.

Sona 4.2B-11 Field of View Advantage: Sona 4.2B-11 with 2048 x 2048 array has a 62% larger field of viewthan a competing back-illuminated sCMOS camera with a 1608 x 1608 array. Captured using a Nikon Ti2 microscope with 60x objective and integrated 1.5x tube lens, accessing the full 2048 x 2048 array while preserving Nyquist resolving clarity. Note that the Andor Magnifying Coupler Unit (MCU) can also be use used to provide additional magnification across a wide range of microscope ports.

Sona is the only back-illuminated sCMOS platform with permanent vacuum sealed sensor enclosure! As well as affording superior minimization of the noise floor, the performance longevity benefits of Andor’s vacuum sensor enclosure should not be overlooked:

NEW 4.2 Megapixel C-mount (Sona 4.2B-6) - Ideal for applications that will benefit from the smaller 6.5 µm pixel size. Perfectly suited to 40x and 60x magnifications with a combination of sensitivity, speed and resolution. Low noise mode uses correlated multi-sampling to achieve a flat and clean image without affecting frame rate.

The ONLY vacuum back-illuminated sCMOS - Andor's proprietary UltraVac™ technology protects the sensor from (a) QE degradation, and (b) moisture condensation.

High Speed Interfaces - All Sona models have USB 3.0 (USB 3.1 Gen 1) for a convenient high speed interface. Sona 4.2B-6 can use coaXPress for the fastest possible data transfer rates.

The darkcurrent of GPixel sCMOS sensors such as that used in the Sona 4.2B-11 is relatively high, compared to that of BAE/Fairchild Imaging sCMOS sensors that are utilized in Zyla and Neo sCMOS cameras. This places additional emphasis on the need to deep cool the sensor in order to suppress the noise floor, i.e. minimizing the camera detection limit. Due to the unique vacuum design, Sona thermoelectrically cools to -25°C with high precision and stability using only the internal fan for heat dissipation. Furthermore, Sona can utilize liquid assisted cooling to push down to a hugely competitive -45°C!

"Back-illuminated sensors are valued specifically for their enhanced sensitivity – it makes sense to choose the most sensitive adaption of this high-end technology."

Having the most sensitive Back-illuminated sCMOS camera carries a host of practical advantages within fluorescence microscopy:

The GSense400 back-illuminated sensor from GPixel is widely recognised to suffer from glow at the edges of the sensor. This glow manifests as false signal and is exposure dependent. To date, the effect has forced camera manufacturers to either limit the usable region of the sensor to an array size notably smaller than the native 2048 x 2048 full resolution, or alternatively to impose a severe 30 millisecond restriction on the maximum exposure length that is permitted by the camera. Either way this fundamentally restricts performance and usefulness across a range of applications, either through field of view limitation or through sensitivity limitation.

Andor have studied and characterised this sensor issue in detail and have developed and implemented a unique anti-glow technology to tackle this problem for the Sona 4.2B-11. The figure below shows a dark image of the GSense 400 back-illuminated sensor with and without anti-glow technology – the difference it makes is stark and has enabled Andor to open up the full 2048 x2048 array, while also greatly extending the exposure time.

For most applications the 16-bit high dynamic range mode of the Sona will be the most flexible and therefore useful mode as it combines speed, the widest dynamic range and low noise floor. But for when the lowest noise floor is required, the GS2020BSI sensor as used in the Sona 4.2B-6, has a low noise mode that can be enabled. This uses a correlated multisampling (CMS) approach so that a low noise floor can be achieved without sacrificing frame rate, or the need to increase exposure times. This makes it well suited to live cell imaging that seek to reduce illumination intensities and use short exposure times to minimize the cell biology being studied. This reduction is achieved in the low noise CMS mode by utilizing the two gain channels and combining the outputs. In this mode, the noise is cut by a factor of [Symbol]2. This equates from a drop from ~1.6e- to 1.2e-. Typical values measured by Andor Technology for the GSENSE2020BSI are consistent with these measurements. The result of this noise reduction method is a “cleaner” image. Because 2 gain channels are being combined as a 12-bit output rather than used to cover a 16-bit range, the dynamic range will be reduced. However, the available well depth of the Sona 4.2B-6 is almost 2 times that of other cameras which utilize this mode providing much greater dynamic range and flexibility in how it may be used. In addition this wider range is done with greater quantitative accuracy.

A comparison of the Correlated Multi-sampling low noise mode implementation in cameras using the GSENSE2020BSI sensor.

* 2-CMS mode as specified by sensor manufacturer and as measured by Andor technology.

** As reported by camera manufacturer

Andor provide an optional Magnifying Coupler Unit (MCU) accessory which can be used alongside the Sona 4.2B-11 in order to utilize the full field of view of this large sensor with several common types of modern research fluorescence microscopes.  It can be used to adapt both Sona 4.2B-11 or Sona 2.0B-11 for use with 60x and 40x objectives, thus increasing the on-sample field of view while also maintain Nyquist resolving clarity. Since the image is being 2x magnified onto a 32 mm diameter sensor area, then the MCU can be attached to any port that offers an image output of 16 mm or greater. This describes the vast majority of available ports. Sona 4.2B-6 with its smaller pixel, means that the sensor size is natively suited to standard microscope ports without additional magnification.

For further details, please refer to the specification sheet for the Andor Magnifying Coupler Unit

The innovative Dual Amplifier architecture of sCMOS sensors uniquely circumvents the need to choose between high or low gain amplifiers, in that signal can be sampled simultaneously by both high gain (low noise) and low gain (high capacity) amplifiers. As such, the lowest noise of the sensor can be harnessed alongside the maximum well depth, affording widest possible dynamic range. Uniquely for such a relatively small pixel design, this allows for dynamic range performance of 35,000:1 for the Sona 4.2B-6, and an impressive 53,000:1 in Sona 4.2B-11.

Furthermore, on-camera intelligence delivers a significant linearity advantage, providing unparalleled quantitative measurement accuracy of over 99.7% across the full dynamic range. This is useful for the growing number of applications that rely on quantitative measurements, and provides confidence in any applications where signal intensity indicates local concentration, e.g. ion flux, FRET and expression analysis.

The Sona models are capable of delivering up to 74 fps, the data streaming to PC through high-bandwidth USB 3.0 and CoaXPress interfaces. This is ideal for fast applications such as cell motility, ion flux and blood flow imaging etc.

Faster speeds still are available through Region of Interest (ROI) selection, scaling only with ROI height, i.e. a full width ROI provides the same frame rate as a reduced with ROI, as long as they share the same number of rows. This can be useful for imaging elongated samples at fast frame rates, such as measuring calcium flux in smooth muscle cells.

The sCMOS sensors in Sona have highly parallel readout architecture, facilitating high data readout rates and therefore fast frame rates. All columns possess their own Amplifier and Analogue to Digital Converter (ADC), meaning that all columns are read out in parallel.

The Sona cameras each utilize a Rolling Shutter exposure mechanism. Rolling shutter essentially means that different lines of the array are exposed at different times as the read out ‘wave’ sweeps through the sensor, a row at the bottom starting the exposure approximately, in the case of Sona 4.2B-11: 21 ms before rows at the sensor’s distal edge. The lowest readout noise and fastest frame rates are available from this mode. Rolling shutter only presents an issue when imaging relatively large, fast moving objects within the field. Then, aside from the risk of motion blur that can affect any imaging condition in which rate of motion is being temporally under-sampled, there is an additional possibility of rolling shutter spatial distortion. However, distortion is less likely when relatively small objects are moving at a rate that is being temporally oversampled by the frame rate, which in fact describes the vast majority of use cases.

A further potential downside of rolling shutter is that different regions of the exposed image will not be precisely correlated in time to other regions, which can be essential for some applications. For example, if a cell is electrically stimulated and it is important to measure the onset of calcium sparks relative to the stimulation event, then rolling shutter should not be used. In this case, a true global shutter mode is required, available in Zyla 5.5 and Neo 5.5 sCMOS cameras.

Andor’s Sona sCMOS camera comes equipped with an in-built FPGA filter that operates in real time to reduce the frequency of occurrence of high noise pixels. This real time filter corrects for pixels that would otherwise appear as spurious ‘salt and pepper’ noise spikes in the image.

The appearance of such noisy pixels is analogous to the situation of Clock Induced Charge (CIC) noise spikes in EMCCD cameras, in that it is due to the fact that we have significantly reduced the noise in the bulk of the sensor that the remaining small percentage of spuriously high noise pixels can become an aesthetic issue. The filter employed dynamically identifies such high noise pixels and replaces them with the mean value of the neighbouring pixels without impacting frame rates.

The Sona platform can generate a timestamp for each image that is accurate to 25 ns. Accurate timestamps can be important where precise knowledge of frame time impacts temporal dynamic analysis. This is especially important for fast events, where computer and interface latencies need to be considered. Areas include signalling cascades, vesicle trafficking, lipid dynamics, synaptic re-modelling, action potential studies using opto-genetics and opto-physiology. Timestamps can also be useful for FRAP Analysis, facilitating the estimation of diffusion rates.